Contrary to all expectations, the Nakamoto coefficient was not mentioned by the creator of Bitcoin. It was published in 2017 by Balaji S. This parameter is important because blockchain users and developers must be sure that any valid transaction they send on the network will be included in a block and then unanimously confirmed. If a group of consensus nodes (network validators) are compromised or behave in a malicious and coordinated manner, they may try to modify the network or prevent it from reaching consensus on new blocks. The Nakamoto parameter is a way to measure the resilience of the blockchain to such behavior. In other words, it makes it possible to estimate how vulnerable it is to harmful consensus.

To put it simply, this 3.0-style parameter represents the number of nodes (verifiers on the network) that should intentionally want to prevent the blockchain from working properly. The higher this coefficient compared to the total number of validators, the lower the risk of corruption, and, consequently, the increasingly decentralized network. It is calculated from 6 indicators:

The level of risk varies depending on the underlying consensus model (Proof of Stake or Proof of Work) of the blockchain network being studied.

We can get several explanations regarding the Nakamoto coefficient on Bitcoin. We can say that if Foundry USA Pool, AntPool, and F2Pool (graph above) came together to coordinate an attack on the network, they would have the computing power to corrupt Bitcoin. However, behind each of these clusters there are minors, like you and me, who decided to contribute to the system by pooling their computing power in order to have a better chance of validating the block and thus getting rewards in bitcoin. If they validate a block together, they share the reward in proportion to each other’s contribution.

This exchange is made possible thanks to a functionality built into the Bitcoin client software that allows a mining pool to mine blocks in collaboration by pooling the computing power of a pool of miners.

We can imagine this, to generalize this system, as if you connect to a server with username, password and push address and then start doing the work of your device so that it solves accounts with other devices of other users on that same server. Once the arithmetic equation for the block is found together, the reward is divided on the different machines according to the amount of work provided (by proof of work).

Let’s go back to the Nakamoto laboratories. As mentioned a little above, we can estimate this coefficient to be 3 by aggregating Foundry USA Pool, Antpool, and F2Pool which together have 55% of the total computing power. This means that it will be enough for three actors to come together to be able to corrupt the network. But since miners are free to leave the pools, they have the ability, at any time, not to follow the will of some other miners within these pools who wish to corrupt the system. For this reason, the coefficient, in the context of Bitcoin, is usually calculated by the number of individual nodes. Their number was just over 13,000 at the time of writing this article.

The number of nodes on the bitcoin network
Source: Bitnodes

So the coefficient is generally estimated to be 51% of the total number of nodes on the network, i.e. 6807. On the other hand, this number should be taken with caution, since each node does not have the same computing power depending on the number and quality of machines accumulated by the miners behind This contract. In other words, a miner A with two miners with its own node will have much less computing power than a group of B miners with 100 machines. By taking the nodes with the largest computing capacity, the number of 6807 will be reduced, since this number is initially calculated as if each node had the same computing power. However, even with this great precision in mind, Bitcoin remains by far the most decentralized network.

Here, we are interested in the Nakamoto blockchain laboratories under Proof of Work, but the process is very different for those working under Proof of Stake.

In blockchain networks that are subject to Proof of Stake, the Nakamoto coefficient that must not be exceeded is different from that seen previously under Proof of Work.

For a Proof of Stake network to function properly, a node must contain no more than 33.4%, or a third (compared to Proof of Work 51%) of the supply locked onto the network otherwise it alone can corrupt the chain. Thus, preventing a node from holding more than 33.4% of voting rights is critical to keeping the network running smoothly and ensuring that it is resistant to censorship. On the other hand, through the same proof-of-work process, the nodes can exchange their “share” to include more than 33.4% of the voting rights.

Suspension : It is important to emphasize that the attacker or the group of attackers does not need to hold a third of the total circulating supply, but rather a third of the active quota (staking or “staking” on the network). In fact, most investors buy their cryptocurrency (powered on the blockchain PoS) and keep it in their wallets without putting it on the network (and thus closing it) in order to become validated and get returns.

Here we understand that the ‘weight’ of the vote or the ‘strength’ of an auditor is proportional to the amount of engagement associated with it. Therefore, validators with a larger stake (and thus more cryptocurrencies accumulated) can have a greater impact on the outcome of the consensus process and prevent the production, securing and verification of authentications with a lower stake. 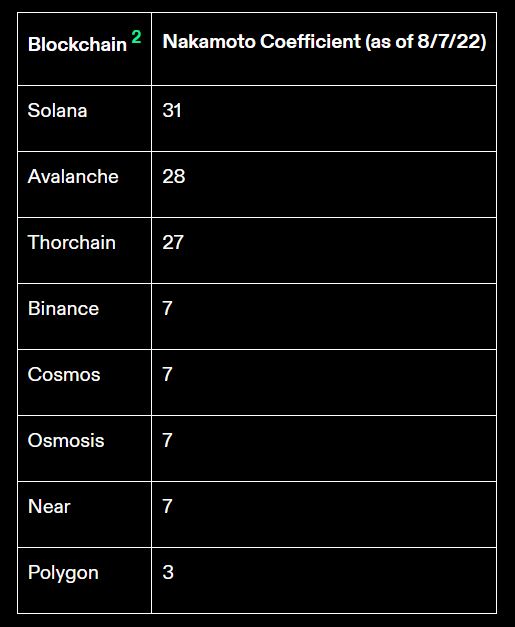 Usually, by observing the above graph, we can see that the Nakamoto coefficient is 31 for the Solana network. This means that the minimum number of validators that must agree to censor the network is 31. In other words, the 31 addresses with more than one SOLS on the network must agree and consolidate to reach 33.4% of the total bets offered and thus be able to enforce Network censorship. We could have the same thought path as Avalanche Network, Binance, and Polygon, but with their associated parameter (see chart above).

An increase in this coefficient over time is a sign of good health for decentralizing the network. On the contrary down.

Suspension : Network auditors have no interest in pooling to own 33.4% of the network. In fact, this could lead to a complete loss of investor confidence in it, and therefore also in the underlying cryptocurrency associated with it. This can lead to massive selling, causing the price of the asset to drop significantly. Thus, validators will still own 33.4% of the network (by holding a cryptocurrency stock) but its economic value will automatically become zero.

Ultimately, the Nakamoto parameter makes it possible to appreciate the decentralized nature of the blockchain network. A very important figure in the eyes of the creator of Bitcoin. On the other hand, blockchain crypto initiatives that quickly returned in the wake of Satoshi’s libertarian philosophy are pioneering approaches. More than 20,000 cryptocurrencies have been added to Bitcoin in 10 years, promising decentralization, social revolution and a new economic model untrustworthy. Marketing veneer 3.0 that was in most cases cleverly and dishonestly presented in white papers for blockchain crypto projects leaving beginners thirsty for quick cash to be sanitized with irreplaceable sauce. From now on, we can at least, thanks to the Nakamoto parameter, quickly appreciate the decentralization of the blockchain, although it is necessary to appreciate other elements to ensure the reliability of the distributed network. Other “on-chain” analysis tools can be found very quickly in the Zonebourse columns.