The French Digital University, whose subsidiary is Digital College Cameroon, organized an official graduation ceremony for its students, along with an award ceremony for the winners of the national digital competition. The event took place in two stages: in Yaounde at the Banquet Hall of the City Hall on July 27, in Yaounde and in Douala at the Atrium Spar Bonango Concert Hall on July 29.

Held in Douala on Friday, July 29, this double ceremony was punctuated by the Games of Lights, Majestic Entry, Sounds and Colors, which reward the winners of the National Digital Competition, as well as graduates of the French Digital University Schools. The Digital College and Higher Schools Keyce Informatique are branches in Cameroon.

so it was only natural that mr. John Yuto (Vice-President of the Collège de Paris and promoter of the Digital College and Foundations of Keyce Informatique) and Ms. Shulamit Nyaka (Vice-Chairman of the Council of Institutions), the ceremony opened with keynote speeches on both digital opportunities in Cameroon and the origins of these schools. 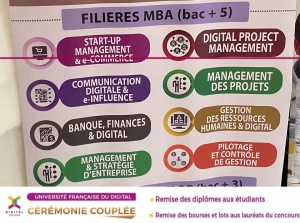 Innovative courses such as Digital Communication, Digital Marketing and other courses in both Bachelors and MBAs allow Cameroonians to equip themselves with ICT, as emphasized by the Country Director, Frank Aso :

In Yaounde on Wednesday 27 July, new graduates joined the ranks of professionals in the digital world. Now experts in the professions of the future, the promotion “The Bachelor Warriors” (thanks to innovative teaching methods), has become a representative of the digital revolution in Cameroon and Africa.

160 winners received grants and prizes at the end of the National Digital Contest organized by Tweet embed and Keyce Computing. The competition was open to pupils in Terminale classes and to students all over Cameroon. pic.twitter.com/StkL0MEQKE

Digital College has set itself the goal of providing these learners and any other tools that can enable them to be more and more competitive in the job market and expert digital entrepreneurs. 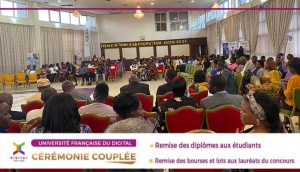 Also, in order to better promote computer engineering, the Foundation opened the attention of students and students of Terminale, the first national digital competition on May 8 and June 18, 2021. So nearly 160 winners were able to take advantage of the inaugural gala cycle of important university scholarship awards ranging from Its value is between 250,000 and 1,200,000 CFA francs.

Today’s digital experts, the digital ingenuity of the future…

During this colorful ceremony, the leaders of the Foundation reiterated their desire to spark the interest of Cameroonian youth in digital technology. The goal, to make our country a country that asserts itself in the field like European countries. Realizing the challenges ahead, the young graduates have promised to demonstrate what they have learned during these three years of training. On hand, they intend to write one of the most beautiful pages in the history of computer engineering in Cameroon.