The Saskatchewan Economic and Co-operative Council (CÉCS) launched the bilingual digital campaign Come & Find Out on April 4 for a second edition. An opportunity to return to the developments of the 2022 component and the results of last year.

Once again this year, Fransaskois communities and companies will be in the spotlight on social networks and on the web in Saskatchewan.

A digital marketing campaign, photo contest, visiting brochures, event calendar and destination guide will be on this list of attractions that will take place from 4 April to 16 June 2022.

Zenon Park is one of seven Francisco communities in the province to participate in the CéCS Come We Find Out campaign. Credits: Courtesy of CÉCS

The goal again this year is to publicize and promote francophone destinations in Saskatchewan. In total, seven communities and six French businesses are offered to local and national tourists, both French-speaking and English.

Thus we find the communities of Gravelbourg, Ponteix, Regina, Zenon Park, Prince Albert, Debden and the Center francophone BDS, located in the heart of the Batoch district, serving the Fransaskois communities of Bellevue, Domrémy and Saint-Louis.

Among the bilingual businesses featured in this second edition are the Champêtre County holiday farm, the two guesthouses with cozy rooms at Chez Nous B&B in Saint-Louis and Wood River Inn & Studio in Laflèche, clothing designer Amaranth Designs in Regina, pottery working in Susan Robertson Pottery in Broderick and the gourmet creations of the Laforge family at Prairie Angel Bakery & Pâtisserie in Carrot River.

“What was a pilot project in response to the economic crisis caused by the pandemic will become a regular annual project thanks to the Canadian Economic Development Support for Prairie (PrairiesCan),” says Kouamé N’Goandi, Executive Director of CÉCS. .

According to him, the current context of historical inflation hitting the purchasing power of travelers could be favorable for domestic tourism, such as a pandemic.

For her part, Marie-Lo-Bernaches, Project Director at CÉCS, noted that this second edition brings its share of novelties. Starting with a visual identity for the campaign and promotional tools distributed to the participants. 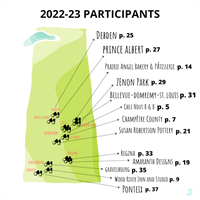 A map of the French communities and companies participating in the Come We Find Out campaign Credits: Courtesy of CÉCS

In addition, provincial tourism promotion champion Andrew Hilts, better known as “Saskatchewander,” promised to visit French communities and businesses. Thus, the professional traveler will introduce Fransaskoisie to the tens of thousands of people who make up his online community.

Similarly, regional public company Tourism Saskatchewan has promised to move the campaign into its networks to give a boost to French-speaking destinations.

Furthermore, Montreal agency Marscheldon Media has been commissioned for the project again this year. Its president, Francisco Michele Marcheldon, says he is very satisfied with the results of the first edition. 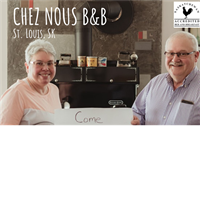 One of the businesses featured in the campaign is Chez Nous B&B in Saint-Louis.
Credits: Courtesy of CÉCS

Fransaskois is invited to take part in a three-week photography competition that started on May 18. The three ‘Photo of the Week’ winners will each win a $200 Fransaskois Gift Basket.