Guita Mazur wants all Moroccans to master the digital world

From now on, the average citizen can learn digitally. It is an approach that can be achieved through the launch of the Digital Academy or “Academy Digital”, Tuesday in Rabat. A platform that aims, as Minister in charge of Digital Transformation and Administrative Reform, Gita Mazur, to “promote effective learning based on equal opportunity”. The government official, relying on royal guidelines and a new development model associated with this transition, agrees with this desire. All while having its own credo that is also shared by the Agency for Digital Development (ADD).

The minister who prefers to speak Darija during this event signs and continues. “Qualified human capital,” she says of the foundations for this transformation. For her, it is true that the Kingdom has winning skills from universities and colleges, but it also wants the offer, through this launch, to be “integrated by meeting new training needs”. That is why this platform offers “diverse content for SMEs, administrations and citizens in order to enhance skills”. “We also want lawyers, economists, and salespeople, among others, to have that digital learning,” she says. The ultimate goal, in his view, is that this knowledge is no longer the prerogative of computer engineers or programmers.
To clarify, the Digital Academy also offers training and awareness courses for civil servants and companies as well as for the general public.
Hence “170 content” was proposed to include programming, networking, artificial intelligence, big data, and many other disciplines.

Even better, this platform will be rolled out in “two phases”. This is the “first three-month pilot program for the benefit of the public and small and medium-sized businesses”. As for the second phase, it will focus on “circulating over the first year for an initial 12,500 beneficiaries.” “I want all Moroccans to have this knowledge,” she continued, also announcing the mobilization of this learning “at a provincial scale.” And that’s not all! The dedicated digital platform welcomes, in Royal Instructions, to the hadith. Also in the game, Ahmed Tawfiq, Minister of Endowments and Islamic Affairs, does not hesitate to quote the Noble Qur’an, specifically the “Digital Book”.
who inspires this transition. As for the name “academic”, it is preferable to name “school”. “We need it,” he says. The provinces and provinces are also involved.
In this regard, Abdelaziz Driouch, president of the Moroccan Association of Heads of State and Territory Councils, which includes 75 of them, sees that “the agreement signed during this inauguration with the Minister and the ADD aims to establish a diagnosis for the training of civil servants in regional units.” 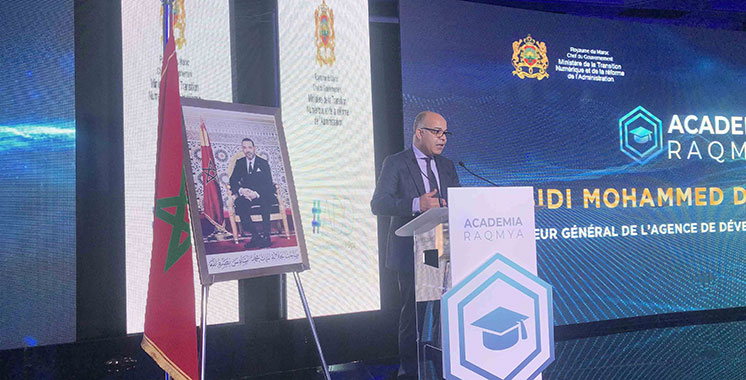 Sidi Mohamed Drissi Meliani, General Manager of ADD, detailed the content of the platform which, he points out, offers “two training sessions”. The “Digital Development Course” is designed for continuous training in the digital field for employees of public departments and companies. The “Digital Acculturation Course” aims to raise awareness and familiarize the general public with the digital number.
In addition, the training catalog covers digital acculturation, discovery, programming, design, infrastructure, networking, artificial intelligence, big data, digital transformation, change management, Internet of Things, Industry 4.0, digital marketing, agile project management, startup development, and soft skills.
Digital acculturation training is also available in “the Arabic dialect for the general public with the aim of introducing Moroccan citizens to some of the basic aspects of digital technology.” In addition, the platform, which aims to train 12,500 beneficiaries annually, offers, as Mr. Miliani reveals, “173 training courses totaling more than 1,200 training content in addition to the training contents provided by several partners. Technologies.” In all, the Digital Academy offers “11 courses totaling 173 courses and a total of 1,234 hours and 46 minutes of training.”